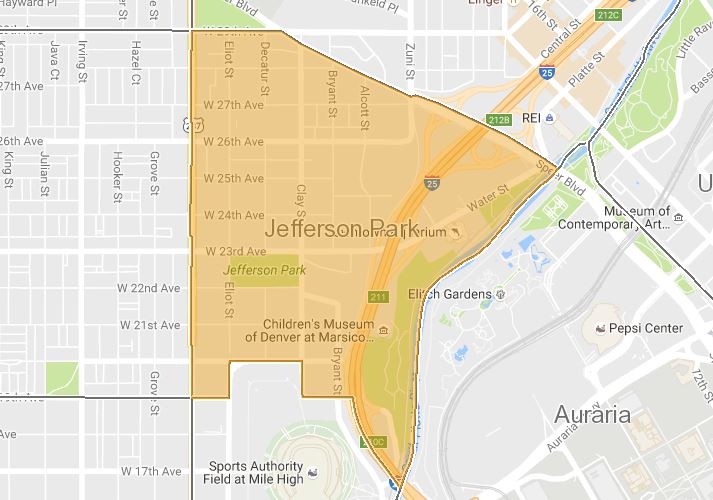 The neighborhood is conveniently located near I-25, making the Central Platte Valley and downtown areas easily accessible. Near the southern section of Jefferson Park, locals utilize the public transportation provided by the Light Rail C-Line.

Bound by Speer Boulevard, I-25, West 20thAvenue, and Federal Boulevard, this has been an affordable-home community since the 1990s. Back then, homeowners hoping for more urban lifestyles rallied together to get the attention of the City of Denver. Jefferson Park quickly became a focus neighborhood, and beautification and infrastructure investments began. This helped to create the small-community feel that exists today.

Since the year 2000, controlled developments and investments have been very effective for bringing positive change to Jefferson Park. Today, you'll still find many homes that represent 1890s, 1910s, 1920s, 1940s, and 1950s architectures.

Jefferson Park's relationships with the City of Denver, Sports Authority Field at Mile High, and others have been instrumental in the neighborhood's revitalization. Many improvements have been made such as upgraded curbs, planted trees; block-beautification programs, paved alleys, and encouraged development. Today, Jefferson Park is one of the hottest Denver communities because of its close-knit neighborhood feel and convenient proximity to the downtown Denver area. 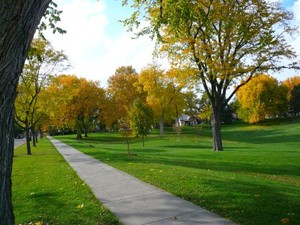 Looking for a home to buy in Jefferson Park?

Search smarter and sign up for Jefferson Park property alerts.  We'll instantly notify you of new listings and price changes so you can always be the first to know about Jefferson Park Real Estate.  Or, if you have a specific question about a property or need immediate assistance, please feel free to contact us.

This is the one you’ve been looking for!! This end unit with no common walls built in 2019 boasts city views and new construction finishings. Dream kitchen with quartz co...

This bright and open carriage house adjacent to Jefferson Park lives like a single-family home with no shared walls! It has a spacious living room, tons of windows and na...

WELCOME HOME-This Jefferson Park Townhouse is a must see! Nicely located a block from the shops and restaurants at 25th and Eliot and only 3 blocks to the park. With just...

This is a rare side by side duplex in an A+ Location just one block from Jefferson Park. Each unit features hard wood floors, it's own front and back entrance a private y...

Completely Remodeled Jefferson Park Victorian. Standing on the curb in front of this home, you'll appreciate the impeccable and thoughtful details that have been restored...

The content relating to real estate for sale in this Web site comes in part from the Internet Data eXchange (“IDX”) program of METROLIST, INC., DBA RECOLORADO® Real estate listings held by brokers other than Real Estate Company are marked with the IDX Logo. This information is being provided for the consumers’ personal, non-commercial use and may not be used for any other purpose. All information subject to change and should be independently verified. IDX Terms and Conditions